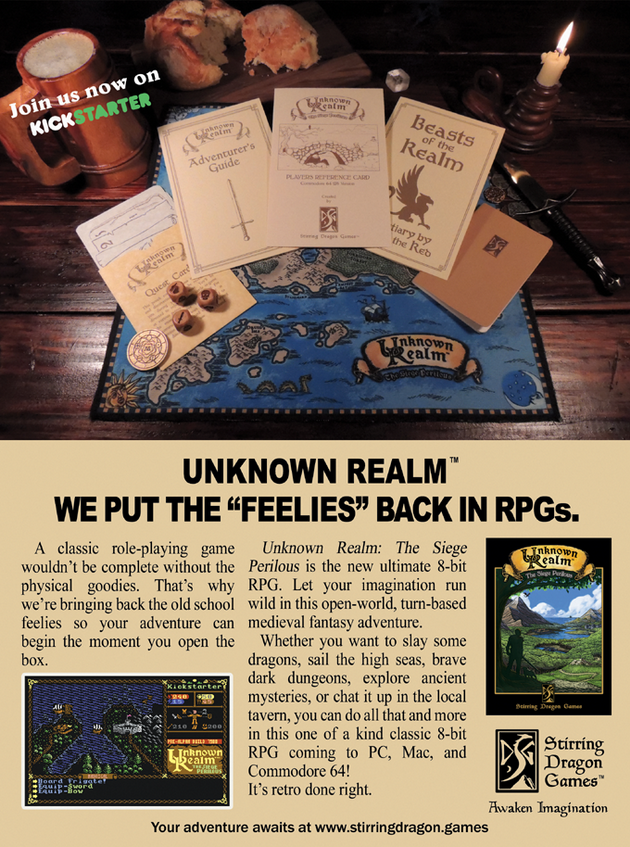 Actually, not an Ultima theme, nevertheless somehow Ultima related and in any case worth a look. I am talking about Unknown Realm - The Siege Perilous, the upcoming 8-bit (!) role playing game in the nostalgic style of the eighties. A kickstarter campaign is in progress by 19 January 2017. The Unknown Realm will be funded when they get 65.536 $. You see, this is a true 8-bit game - 65.536 is two to the power of sixteen, the amount of memory-bytes which an eight-bit CPU can address :-)

Why is it that anytime you ask an RPG fan what their favorite game is, they will almost inevitably name a game that was made 30 years ago? You know the games we're talking about, games like Ultima, Legacy of the Ancients, Wasteland, SSI “Gold Box” titles, or some other game from the “Golden Age” of RPGs. Despite the high-end graphics and advances of modern RPGs, they still somehow fail to live up to the enjoyment found in these fan favorites of the past.

Let’s face it: those low-fidelity RPGs had something special. They had the perfect mix of presentation and gameplay that allowed your imagination to run free. Sadly, f or some reason, game companies decided to stop making single player RPGs like this and thus abandoned a generation of RPG fans … until now.

Here are some cool pictures of the game. Look at them and you will know why I like and support this game. Please keep in mind the reward photos show working prototypes; the artwork and materials of the final versions may change a bit.

Sail to distant lands but don't forget to use your map

If you want to learn more and if you like old style games like this, consider becoming a backer of this campaign.